Skip to content
No one said there’d be math: A cautionary tale

Math in the Real World

No one said they’d be math: A cautionary tale

Shopping for a car is famously one of the bigger hassles in life. The reason is pretty simple: the industry’s success is largely based on its customers’ unawareness of certain basic facts and a fear of the math that creates the final price.

I bought my 2017 Mini Cooper S convertible from the Brahman dealership on Biscayne Boulevard in late 2016. I negotiated what I thought was a fair price, got in the car and drove away. Afterward, I discovered I probably overpaid by a few hundred dollars, but decided not to dwell on it. I truly like the car: it’s fun to drive, doesn’t take up much space and putting the top down really makes me feel like I’ve fully embraced the Florida lifestyle.

However, it has been far from hassle-free. The day after I purchased it, I got a screw in my tire from the endless construction in my old neighborhood just south of Wynwood. In the years since, I have had no fewer than five tires replaced. Now, of course, that has nothing to with Mini or Brahman, but I am incredibly grateful that I purchased the tire warranty, as Mini tires can go for $300 each.

But in addition to the tires, there have been a few electrical problems as well as a memorable shattering of the back window that apparently so befuddled the local mechanics that a crew was flown out from Germany to help. None of this has cost me a dime, thanks to the three-year/36,000 mile comprehensive warranty the Mini folks provide with new cars.

I am not close to 36,000 miles, as I mostly drive between my new place in Edgewater to FIU in North Miami. Still, the three year mark — and the expiration of said warranty — looms ever larger in my mind. About a week ago, I received a call about extending that warranty to as long as seven years. Intrigued, I asked about the cost, but was told instead that someone would get back to me — now that I expressed interest.

But instead of a call from a warranty rep, I received an email from the dealership’s sales manager and a call from the woman who had originally sold me the car asking if I might be instead interested in a new one.

And so my trouble began

On its face, the deal looked straightforward. If I were to trade in my convertible, I could walk out of the dealership with a brand-new one by increasing my monthly payment from $574/month to $634/month. The deal assumed that I had 40 more payments to go on my original deal, and noted that the six-year financing clock would reset if I decided to go forward. 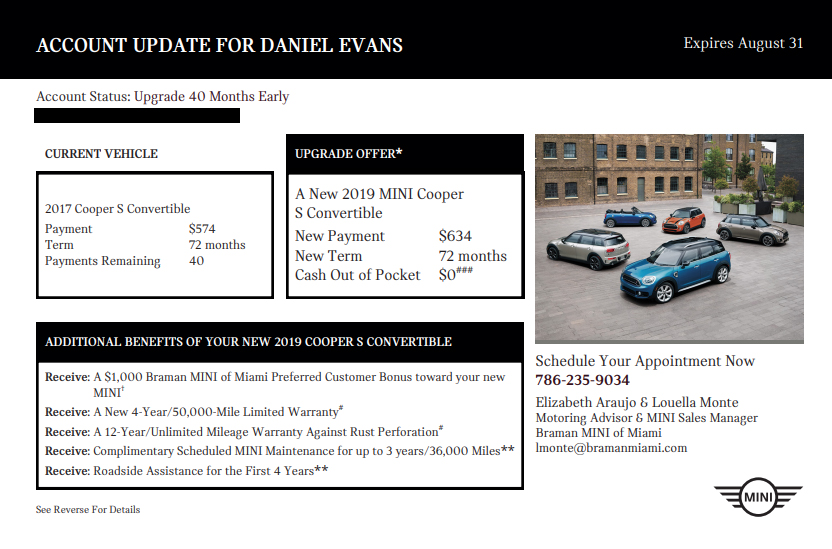 Still, the offer seemed pretty simple so I called and made an appointment. Maybe they bought too many convertibles, or the 2020 models were such a significant change that they needed to get the 2019s off the lot. Frankly, the mechanics of car prices are pretty opaque, so I just figured I’d find out what the real deal was.

Folks, the deal was a dog. A smelly, ill-tempered wet dog of a deal.

After walking in and chatting with the saleswoman and her manager, my car was appraised to be worth $19,500. Now, that seemed a bit low, given its relatively low mileage, but what really perked up my ears was the discussion of the 2019 price, which she set at about $37,000. The daylight was growing. Now the difference was $17,500, not even $13,000. What was going on?

I showed her the email I had received and expressed my confusion. I said if they were willing to trade my old car and $4,320 for a new one, I’d do it right then and there. She demurred and excused herself to speak to her boss, saying she wasn’t quite sure she understood the deal herself.

When she returned, she explained the following. First, if I had been making my regular payments, I would still owe about $21,300. Since the car is worth $19,500, I would be upside down — that is, I owed more than the car was worth — by about $1,800. That would need to be added to the cost of the new car for any financing deal. So, basically, I would get less than nothing — owe Brahman, in fact — for the car I currently own and pay (essentially) full price for a new car.

Calculating this out, the deal assumes I would be financing about $41,000 and paying about $45,648 over the life of the loan.

Now, because I own my car outright, the calculation is a bit simpler. I would be financing the $17,500 (the cost of the new car minus my trade in) plus any taxes or fees. On a 72-month schedule, this works out to $254 a month. On a more orange-to-orange basis, this is the true increased cost, not $60.

I told my saleswoman I thought the offer was intentionally confusing, sneaky and a bad way to do business. I left. I will not be buying another car from them, it seems.

So, as a cautionary tale: When buying a new car, make sure to be always looking at the total cost. Many dealerships will use the monthly payments as a basis as it hides (quite nicely, in fact) the full fare. And also, in my opinion, don’t buy a new car if you’re planning on selling it within three years. You’ll get hosed. Frankly, you probably need to wait five to seven years to make the costs vs. leasing work out.